Emerging out the other side of a book project might be how I prepare for the empty nest syndrome. Books aren’t children, but they dwell with one’s family for years, and then suddenly one day they have to go out into the world, never to be cajoled or coaxed into growth again. I’m calling this the empty desk syndrome, except it’s ridiculous – I’m as buried under as ever. More than ever, to be honest. In any case, I’ve done three big book projects with two tiny sons tearing the paper apart, and I have two more drafts completed that they’re itching to pull to pieces every time I slide the springback binder off my desk… The trick is that I increasingly see them both as future readers of the words I’m writing. Somewhere off in the receding future, they co-exist with cracking spines rather than scrawling crayons. And that makes me ask how I re-read the things I read while young. 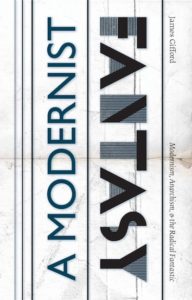 I opened A Modernist Fantasy by pointing to the books from my childhood. I would have never written that kind of book if my neighbour Julie hadn’t passed a copy of Pamela Dean’s fantasy novel The Secret Country over the fence during the summer of 1985. It might not seem like a network or coterie, but I’m calling it close enough. I was as mystified by the novel as I was by its magical cover with a unicorn and castle. So while the moment of 1980s fantasy fiction that nurtured my love of reading wasn’t the focus of my own project (I looked earlier, I looked to the more radical), it was the impulse. It set me on that path and urged me to ask questions that led to it. It also demanded that the cultural studies part of my mind see these books in two ways: (1) as “books that real people actually read” and hence have a social history of importance, and (2) as books playfully aware of the complexities of literary hobby horses and the formal experimentation of the twentieth century. I could look to Dean’s allusion-packed Tam Lin as well as David Eddings’s silly emperor watching model war games. Of course, those models are an allusion to Uncle Toby in Tristram Shandy. After all, Eddings had lecture notes on Sterne in his archives, but that also changed how I would read the maps and images tucked into Eddings’s novel against the emblem of Sterne’s work.

Now I’m reading those books from my childhood again and maybe being cajoled by them into writing a new project or perhaps just learning to simply be a reader for a while. That’s an unreasonable thing for an academic: to read without the critical faculty churning like a discontent or nervous foot. I knew it wouldn’t happen, and that’s what made me curious. 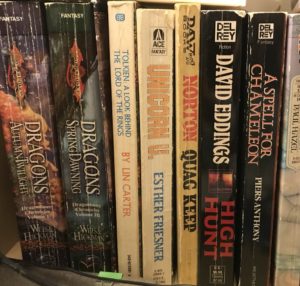 The books that first lured me to read under the covers, hide with a flashlight, or bike off past farm fields to read under the trees in the park were all from around the same period, roughly 1977–87. It’s a strange moment in fantasy as a genre too. I was only three years old when fantasy surpassed science fiction in sales, and that year is still lamented by foundational critics in the SF field as the death of western civilization (I’m pointing at Fredric Jameson and Darko Suvin). That strange cluster of the Eighties, or really 1977–90, is puzzling. The tendency, deriving from Jameson and Suvin, is to look at those books as reactionary nostalgia, and that’s precisely what I set out to disprove about the genre in A Modernist Fantasy, but it’s a harder argument to make about that 1980s moment that beguiled me as a young reader.

In 1977, the publication of Tolkien’s The Silmarillion shook bestseller lists (and set Guy Gavriel Kay off toward his 80s fantasy trilogy The Fionavar Tapestry). The same year saw the start of Piers Anthony‘s still (r/p)unning Xanth series with A Spell for Chameleon, Stephen R. Donaldson‘s also-still-running Chronicles of Thomas Covenant with Lord Foul’s Bane, and Terry Brooks‘s also-also-still-running Shannara with The Sword of Shannara. It’s also the same year as Dungeons & Dragons Basic Set and the first AD&D. The problem for me is why this shift happened in 1977 with these four (or six) books?

In a sense, 1977 wasn’t really a change. Ursula K. Le Guin began her Earthsea series in 1968 with A Wizard of Earthsea (or four years earlier with a short story), Mary Stewart‘s Arthurian series started in 1970 with The Crystal Cave, and Katherine Kurtz‘s Deryni Rising in the same year started her own series. The change, really, seems to be a shift from female to male writers… But there’s also a change in money – the naturalization of commercial exchange (buying ale in a tavern and jingling a purse of filthy lucre) arrives in 1977 in a way we don’t see earlier, especially not in Tolkien. And maybe this is really a better complaint to use by turning to Jameson and Suvin, no matter how hard I eschewed them for A Modernist Fantasy.

1980s fantasy seems deep set in rising neoliberalism. Dragons of Autumn Twilight, the book that launched a thousand novels, opens with that D&D tavern and Tika Waylan deep in a Protestant work ethic that would find her interpellated perfectly in a McDonald’s today. The Sword of Shannara opens with Flick as a traveling salesman of a sort. Eddings has blood red coins that tilt economies with a flood of capital. The other giant series, Forgotten Realms, turns instead to race with a thinly veiled finger pointed to American racism in The Crystal Shard, yet each book in its first trilogy seems to really mean class and circles around recovering a treasure, and always homesick for the Icewind Dale that exists only to exploit the sale of fish whose bones are ivory. Charles de Lint‘s Moonheart and depictions of indigenous peoples seems steeped in the same identity politics of neoliberalism. The naturalization of choice as an expression of capitalist exchange, the production of race as a condition of capitalism, and freedom as the freedom to own and exchange appear to be deep set. For this reason, I feel sure Friedrich Hayek would have loved Dragonlance.

But what does this mean? I certainly read these books in my youth with a very different state of mind, but I was at least of the moment of their production. My students read (and still read) them too, but they were born in a different century and, most often, on a different continent. I first went back to re-read Eddings at the prompting of one of my students from Zimbabwe who grew up reading him too, but can we be said to have read the same books? Is it unfair of me to switch tracks and suddenly historicize fantasy after 1977? Could I do anything else? There’s an element of chance to wandering into a project not really knowing what, if anything, one might find – at what point in a scholarly career can any of us simply enjoy the luxury of that role of the dice?

The fall of the Berlin Wall ushered in something new as well. If fantasy was uniquely receptive to the economic and political climate of the 1980s, absorbing Thatcher and Reagan ideologically even while espousing a social and cultural liberalism, the genre took to the unifying Germany and post-Soviet world almost immediately and changed again. An explicitly Randian libertarianism appears in Terry Goodkind’s Sword of Truth series (make no confusion here with Le Guin’s and Moorcock’s anarchism). There’s more than a little pleasure to be taken in knowing Goodkind’s description of capitalist competition through trees has been debunked in the wood-wide-web… (this is my personal schadenfreude). Robert Jordan‘s Wheel of Time is deep set in concerns of power and domination, and the ongoing sprawling realpolitik of George R.R. Martin‘s Song of Fire & Ice seems ready to call out the climactic cataclysm we call the unspoken condition of late capitalism. In any case, the hopeful pluralism of the 1980s had gone, even if that pluralism had been bought rather that conjured.

The Battle for Seattle in the 1999 WTO protests in turn opened to something new in urban fantasy. Identity politics might, in the kind of analysis Jameson urges us toward, be understood as neoliberalism’s greatest reification, but the impulse behind Buffy the Vampire Slayer makes the personal political in a seemingly different way. It endorses a sense of identity distinct from that which the materialist discourses of neoliberalism imply. Nancy Fraser would not approve… If we accept that “claims for social justice seem to divide into two types: claims for the redistribution of resources and claims for the recognition of cultural difference,” then fantasy of the naughts aims for recognizing cultural difference. Maybe it makes a challenge at the beating heart of our critical disputes today. And in this difference we find Nicole Peeler‘s Trueniverse, Margaret Killjoy‘s Danielle Cain, Saladin Ahmed‘s Throne of the Crescent Moon, Jes Battis‘s OSI, and Daniel Heath Justice‘s Way of Thorn & Thunder trilogy. Reactionary interpellations of the consuming subject as an exotic product, or a radical subversion?

But seriously, anyone who calls fantasy apolitical has gotta take a closer look. And with that, my empty desk is about to collapse under new weights.